I spent the first 25 years of my life in Michigan and in all that time I never visited Mackinac Island, one of Michigan's premier tourist destinations.  It may have been because ferry cost out to the island was $12 for a child and my Dad had seven (plus two adults at $25/head) added up pretty quickly to a "No we're not stopping." retort to our on-the-way-to Gram-ma's entreaties.  One of the cool things about blogging is the readers keep you "honest".  Left to my own devices I probably would have passed on visiting the Island but I can just imagine reading the "You were within sight of Mackinac Island and you DIDN'T go???" comments from some of the readers of this blog (and you know who you are....;>D) so I ponied up the $25 round trip ferry cost and went.

I arrived on-Island at 10 am in perfect 75 degree sunny weather aware that the forecast called for afternoon showers so I got to work.  There are no cars on the Island (with the exception of emergency vehicles) so horse-drawn carriage or bike rental is the common method of getting around it.  I passed on the $6/hour bike rentals and hoofed it after coming up with the locations I wanted to see.

From town I walked along a lakeside bike path towards the west end of the island with a great view of Mackinac Bridge and deep blue Lake Huron.  Wild flowers were growing everywhere on both sides of the tree-shaded path. 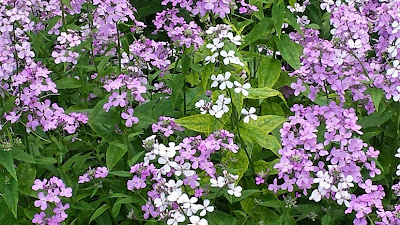 After walking a lot further than I had figured on I got to the west end of the Island and had a lunch of a chili-dog and a bottle of water.  The British moved their fort to the island from one at the tip of the Lower Peninsula prior to the War of 1812.  This cannon was probably to dissuade attempted landings by the US on this remote part of the island.

Heading back towards town I passed the site (now a golf course) of an important battle of the War of 1812 where a force of 750 Americans tried to retake the Island from the British.  The American commander was killed early in the battle and the Americans forced to retreat back to their flotilla in a clear-cut British victory.

From the battle site I walked back to the southeast side of the Island to Fort Mackinac, the British battlement that made Mackinac Island strategically important in 1812.

There was a $11 entrance fee to get inside the fort which any history buff would fork over willingly.  There are numerous actors dressed up as soldiers and 1812-period civilians within the fort which has been restored to it's 1890's condition, after which it was no longer garrisoned.

Fort Mackinac overlooks the town and scenic harbor of the Island.


Here's why the Fort was sited where it is by the builders.

Noticing some clouds forming up I quickly left the fort for the Grand Hotel, scene of business "seminars" and tax-write-off-able R&R for businesses.  It cost $10 to enter the hotel if you weren't staying there so here's my resolution to that cost.

With blue sky over half the island and dark clouds over the other half I headed for the jet boat back to the Lower Peninsula.

They say a good day of walking is taking 10,000 steps.....Check out my post-Island pedometer reading. 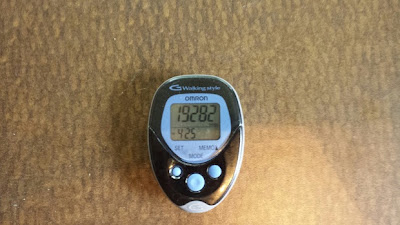 Maybe bike rental IS the way to go.