Stretching for 1.7 miles along the Oregon side of the Columbia River east of Rufus, OR, Giles French Park is owned and operated by the Army Corps of Engineers and, like most Corps of Engineers projects, allows free camping for up to 14 days.

I spent two nights at the park in the middle of June preparatory to venturing into the state of Washington to meet up with Camping Buddy Becky for some Washington State Park camping.  Here's the data sheet on Giles French Park:

One of the first impressions you get upon arriving at Giles French Park is how very windy it is.  The Columbia River has created a natural "wind tube" through hills on each side of it and during the day I don't think the winds were ever below 20 mph.

The southern edge of the park (on the Oregon side) features an imposing cliff face.

The park features a boat ramp into the Columbia River at it's western end which was in heavy use by fishermen.  The waters of the Columbia were pretty rough no doubt thanks to the high winds, not really "kayak-able".

There were plenty of small trails in the park that went down the 15 feet from the park elevation to the riverbank and these were utilized by shore fisherman to fish.

On the way to Giles French Park I took this shot of Mt. Hood in the distance.

My only knock on Giles French was the rail line (very active) that runs along it's south boundary.  With six trains per night running past it I didn't sleep very well.  Strangely, it seemed like there were less trains during the day.  Bring some earplugs if you value uninterrupted nightly sleep but for an attractive site to get free access to the Columbia River this park fits the bill.

Thanks for reading!
Posted by JM Monica at 10:04 AM No comments:

I forgot to post one more photo I took from the Craters of the Moon National Monument.  I was hiking through lava formations that were adjacent to the camping ground and I came across this very strange sight:

At first I thought it might be the very strangest geocache I'd ever seen.  No idea whatsoever.  Anyway I thought I'd share the weirdness.  I didn't touch it and left it to "weird-out" the next hiker.

Thanks for reading!
Posted by JM Monica at 1:37 PM No comments:

Craters of the Moon National Park and Monument Arco, ID

Note:  Before I moved into Oregon I visited Craters of the Moon National Monument near Arco, ID.  This post is out of chronological sequence because with all the pictures I took and as weak as my internet connection had been until now it would have taken days to upload.

Craters of the Moon is a vast lava field that was formed over 8 eruptive geologic periods from 15,000 to 2000 years ago when what is now Idaho had active volcanoes.

The Great Rift, out of which the lava erupted, stretches 52 miles across southern Idaho.  The time between actual lava eruptions averages about 2000 years and the last one was about 2000 years ago.  I stayed two nights at the campground ($25/night, no hookups) and rode Wally the Mountain Bike around the Park's 8 mile road loop that gives access to the various points of interest.

There's a short half mile trail through the Orchard with plaques along it explaining what you are seeing.

There are several cave sites in the park that visitors are allowed to enter and explore if you stop at the Visitor Center and get a permit.

The caves were formed by "Lava Tubes" which is when the lava exposed to the air cools and  hardens but the lava beneath continues to flow creating a tube or, now, a cave.  The caves are accessed via a three quarter mile trail system from the parking lot.

I chose to go through Indian Tunnel, a lava tube so named because the Shoshone Indians used to shelter in it overnight on their movement through the lava fields.


Part of the roof of Indian Tunnel had caved in some time in the past so light was able to shine through and you could see most of the loose rocks and boulders you had to climb around as you followed a discernible path to the exit point about 100 yards away.  A flashlight is probably a good idea.

I was kind of surprised that the Park Service lets pretty much anyone wander around in the caves as there were lots of ways to tear up an ankle or leg among the thousands of various sized chunks of lava making up the loose floor, but I made it out injury-free.

My second day at the Park when I did all the exploring I rode Wally more than 8 miles and logged over 12,000 steps on my pedometer.  I went to bed early that night.

If you are ever in southern Idaho you HAVE to spend a day at Craters of the Moon, it's just awesome scenery and exploring the caves is a blast!

Thanks for reading!
Posted by JM Monica at 9:27 AM No comments:

I finally got to a location where I'm getting good internet reception (Yay!) so here's some pictures from my time on the Snake River.

The stretch of US Forestry land I stayed on is really just a field along Oregon HWY 201, not terribly scenic except for the hills and, of course, the Snake.

The valley that the Snake cuts through the surrounding hills was a natural wind "funnel" and it was breezy to windy the whole time I was there.

The Snake River is pretty impressive.  It was about a quarter mile across at the point I camped at.

Thanks for reading!
Posted by JM Monica at 10:00 AM No comments:

On the Snake River

Sorry for the delay in posting anything.  I've spent the last six days in Oregon (Ora-gun not Ora-gan I've been corrected) on US Forrest Service land along the Snake River right before it makes it's turn into Idaho.  It's about 40 miles up I-84 from Boise.  My cell and internet connection is so iffy I'm unable to upload any pictures I've taken (I tried, the upload timed out) and I'm not even certain if this text-only post will make it but if it does then I promise to upload pictures of the site whenever my internet "pipe" gets bigger than a skinny straw.

Plans are to head into Washington state and meet up with Camping Buddy Becky for camping at one of her favorite state parks (Washington is her home state.)  That's late in June so hopefully between now and then I can get to a spot with good Verizon coverage and do a "normal" post.  Just wanted to let you know I'm still kicking out here!

Thanks for reading!
Posted by JM Monica at 8:00 AM No comments:

With plans to take the Tank into Idaho for the first time I headed north of Salt Lake City to the small Utah town of Newton where early LDS pioneers created an earthen water conservation project across Clarkson Creek in 1872.  It was the first large irrigation project in Utah and one of the first in the entire US.  The earthen dam was replaced in 1946 by a more permanent dam a mile downstream from the original creating the 300 acre Newton Reservoir. 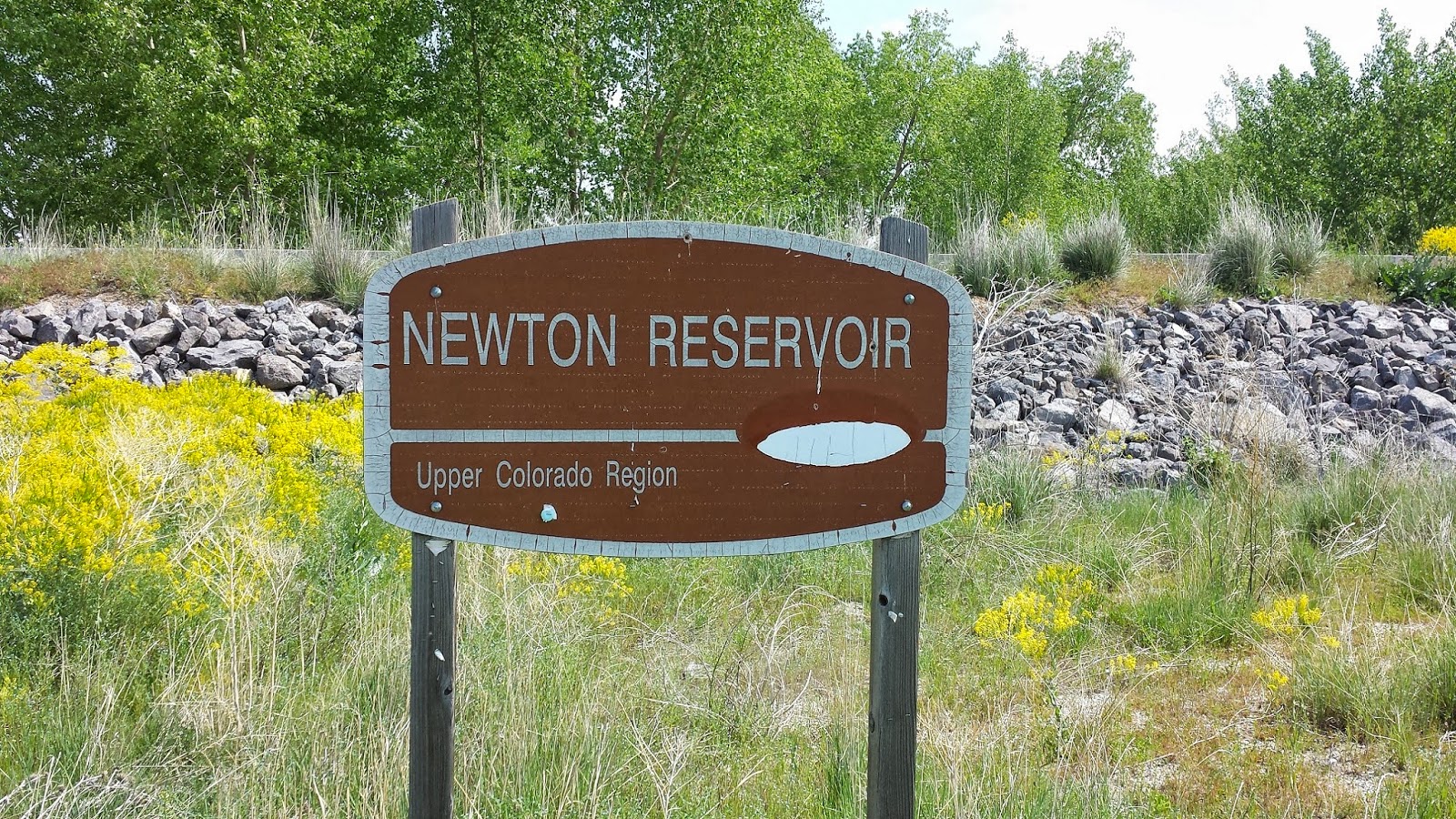 You can camp for 14 days free at Newton Reservoir, unfortunately my black tank filling up limited me to four days before I had to leave and seek a RV tank dump site but while there I enjoyed the pond-like atmosphere.

If you are allergic to golden rod you may want to avoid camping at Newton Reservoir in the late Spring!

There was fairly heavy use of the reservoir by water skiers during the low-80's weather while I was there.  Usually the mornings were fairly boat free.

Camping at Newton Reservoir was really enjoyable and I would have stayed longer if my tanks had allowed.  Try it, you'll love it!

Thanks for reading!
Posted by JM Monica at 9:54 AM No comments: