I woke up this morning at my campsite in Michigan's UP shivering.  After I forced myself to get out of bed and turn on the heat I looked at the Mini's thermometer:


I'm going to spend this morning planning my migration to the Southwest.  Watching the news about the hurricane this morning I guess I'm lucky it's just cold here.  Glad my house has wheels!

Thanks for reading!
Posted by JM Monica at 3:49 AM No comments:

The weekend after my Dad's birthday my family got together at one of Midland's parks to celebrate!

Although rain was forecast we lucked out with beautiful sunny weather and everyone had a blast.

Thanks for reading!
Posted by JM Monica at 11:25 AM No comments:

There's a really nice city park in the northeast corner of the small township of Pickford, MI (Pop. 1,595) called Glen Gough Memorial Park and I made it my final camping spot in this year's Upper Peninsula swing. 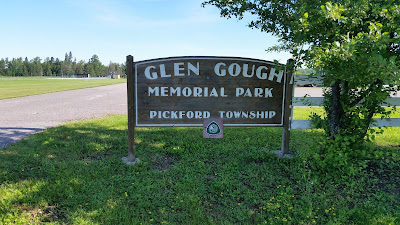 
The park is extremely well kept by the town with a crew of three employees working on it every day I stayed there.

I reported that the park has water access and due to the Munuscong River providing the park's northern border that is true, but I wouldn't plan on doing any swimming.


The park has a little league ball diamond, a kiddo play area, and a large meeting hall.


Gough Park actually has two separate camp areas.  The one closest to the park entrance where I stayed has nine sites then along the north edge is a second group of sites with nine more sites.


I usually don't comment on the bathrooms and showers at places I camp but I have to say that the Gough Park showers were the cleanest I've ever seen!

If you enjoy camping in clean, quiet, reasonably priced municipal parks then Glen Gough Memorial Park is for you!  It's always rewarding to discover a really good camping spot to work into the camping "rotation" in a particular geographic area, Gough Park gets added to next years Upper Peninsula rotation.

Thanks for reading!
Posted by JM Monica at 11:10 AM No comments:

Thanks for reading!
Posted by JM Monica at 5:47 AM No comments:

I decided to continue heading east in Michigan's Upper Peninsula and found a campsite at the US Forest Service's Brevoort Lake Recreation Area within the Hiawatha National Forest.  I love camping in National Forests because I get to use my Senior Pass that gives me 50% off of whatever the nightly camping rate is.  When I bought my card, which is good for your lifetime, incidentally, the price was a ridiculously low $10!  It more than paid that back in savings on my first usage. 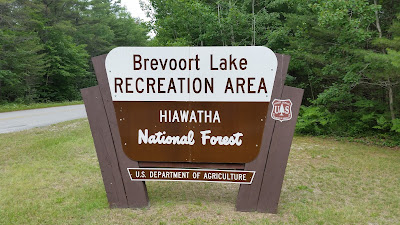 Located about two miles north of US 2 (the UP's main drag) the campground is accessed by a paved road all the way into the campsites, which is nice if it's been raining.  The campground is situated on a peninsula that juts into the 4233 acre Brevoort Lake so there are a lot of waterfront campsites but you need to get reservations to get one of those, as I was a "walk in" I ended up in a non-waterfront site, although I had a view of the lake.  There are about 70 campsites divided into two areas.

The campsites at Brevoort Lake are very spacious and almost all are completely shaded by the large forest in which it resides, that was somewhat problematic for my attempts at using the Mini's solar suitcase although I managed enough sunlight to keep the house battery and my electronics charged.


My site was adjacent to the boat ramp and fishing pier and actually had a little trail through the woods to the ramp and pier so I guess that was my "waterfront".

There were a couple hiking trails through the forest around the camp but the first one I tried was very narrow and seemed to have poison ivy along it (I'm never 100% sure of my ability to ID poison ivy) so I pretty much kept to the camp roads to do my walking. 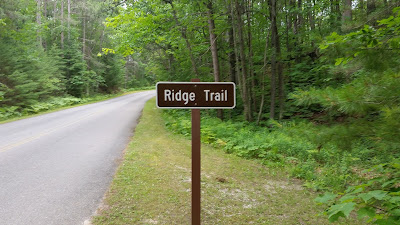 On the plus side, there were very few mosquitoes around my site which, anyone who has camped the UP knows, was pretty amazing.  I did my walking without spraying DEET all over myself!


I stayed four days at Brevoort Lake Campground and found the camping there really enjoyable.  The one piece of advice I'd give anyone who is considering camping there (and which I'll remember for next year) is to reserve a waterfront site well in advance of when you want to camp there, it'll make your camping experience much more memorable.

Thanks for reading!
Posted by JM Monica at 5:50 AM No comments: