A few posts back I reviewed the really nice Paint River Forks Campground in the Ottawa National Forest and said I would definitely be back and I got pretty close sooner than I thought I would.  If you read that review you might remember a picture of a sign announcing a canoe route downriver to the Blockhouse Campground five miles away.  The Blockhouse is also a free for 14 days campground the US Forestry Service administers and I decided to try camping there on my way out of Michigan's Upper Peninsula.

From the town of Iron River, MI you travel 17 miles to the northwest into the Ottawa National Forest and down a four mile gravel road that dead-ends into the Blockhouse Campground which has a grassy two-track loop that passes the TWO, that's right two, campsites that make up the (very) rustic and only lightly used camping/fishing destination.  As usual I was the only camper there so the Tank snagged by far the most desirable campsite, I had high hopes since I was parked literally feet from the Paint River.

I researched why the campground is named The Blockhouse thinking maybe a fort had existed near there at some point in the past but couldn't find a reason for the name anywhere.  Oh well...here's the Blockhouse stat sheet:

If your rig is wider than the Tank you might have a problem getting into the best of the two campsites as the driveway is "guarded".

The Tank only just fit by the stone to the left and through some light bushes.  As always when camping in probably any National Forest but especially in Michigan, bring insect repellent or you will be going crazy swatting them in a very short time at the Blockhouse.

While my campsite at the Blockhouse was fairly open to sunlight (and thus solar power friendly) the other one there was completely shaded and, on a really hot day might be preferable to non-solar equipped campers.

Although my weather experience at the Blockhouse, while sunny, was anything but hot when I awoke the next morning and the Tank's chronometer showed:

You may have deduced from the campground stat sheet that I only stayed one night at the Blockhouse because of the surprising lack of Verizon coverage and you'd have been correct!.  It was the first time I could remember not being able to get a signal of any kind even while using my Wilson cell booster, even while camping in the Rockies!  I think it's because the campground is in somewhat of a valley along the river and hills block the line to the cell towers.  Being a solo camper I found it a little uncomfortable being faced with the issue of not being able to call for assistance in the event of a Tank breakdown or emergency of some kind, plus I like my family to be able to get hold of me so, knowing a great National Forest campground with Verizon coverage was five miles away....

I once again had the Paint River Forks campground to myself and, with cell and internet coverage, found the seven day camping to be the preferred Paint River camping experience of the two campgrounds.  But if you really want seclusion go for the Blockhouse.

I didn't title this post as a "Campground Review" because a lot of people wouldn't consider staying at a casino in their RV as camping.  I've spent a number of days at casinos this summer and I thought I'd review my favorite, the Kewadin Shores.

Located just northeast of St. Ignace the Kewadin Shores Casino offers a full menu of gambling activities (with the exception of sports betting) including craps and blackjack.  Blackjack is my game of choice.  I'm not as good as my college buddy Gary who has won thousands of dollars in a single session but I'm a decent low-stakes player and I usually walk out with more money than I came in with.  You of course can't take photos inside the casino but here's a shot of the outside at sunrise:

When you "casino camp" at the Kewadin Shores you have two choices, free or pay.  If you choose "free" then you get to park your rig in a parking space in a large secondary parking lot at no cost for basically as many days as you want.  There are no hookups with this option but there is trash service and free use of the casino's dump station.

The "Pay" option costs $15 / night and that buys you one of the approximately 20 full hookup sites on two sides of the secondary parking lot.  The sites are unshaded and gravel but do include a picnic table.  Up until this year the sites were $10 / night which was a real bargain but a casino employee said the Tribe had noticed a lot of people were renting the sites just to recreate in the St. Ignace area and refraining from ever entering the casino -- so they increased the rate 50%.  Pay me now or pay me later I guess.

The Tank has solar panels so I always go with the "Free" option and feel that I have a $15 daily stake to start with at the casino.  Over the three days I stayed I won $53 so I looked at it with the perspective that the Tribe paid me $17 a day to stay at their facility! Beats the heck (at least monetarily) out of paying $25 / night for a state park site although in their defense the state parks DO offer a better camping experience than an asphalt parking lot.

Anyway that's where I've been for a while, just thought I'd update things.  I want to close out my Michigan swing by boondocking at the Blockhouse Campground in the Ottawa National Forest where I enjoyed the camping last month but  the Upper Peninsula has had several days of rain and I'm concerned about getting the Tank through the muddy forest roads.....we'll see.

Thanks for reading!
Posted by JM Monica at 10:30 AM No comments: 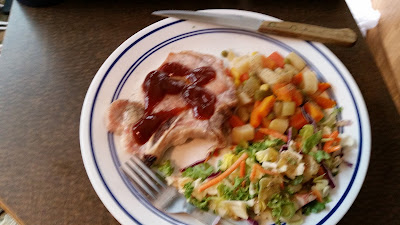 I wish I could tell you that all my meals in the Tank were this well balanced (or even eaten off a plate!) but I won't lie to you.  It's 87 F here in the Tank while I pen this and that is becoming a very motivating reason to get up to the Upper Peninsula's cooler climate.  I'm going to hit the Anytime Fitness in Cadillac on my way up for a much needed workout (and shower).

Thanks for reading!
Posted by JM Monica at 12:17 PM No comments:

I decided to attend my Dad's 88th birthday celebration and changed my plans from camping my way out West to heading back to my childhood home of Midland, MI where my Dad is retired.  I did it in two 180 mile hops which underscored how big the state is (but not compared to Texas).

Midland is unofficially known as "The City of Churches" because there is seemingly one church for every 30 or 40 persons.  Here's one of the churches with a modern architecture:

My brother Jim graciously let me "camp" in his driveway during the wait up to my Dad's birthday, I even had electrical hookups.

So Jim, two of my sisters who also live in Midland and myself took my Dad out to a great Italian dinner for his birthday and then retired back to his house for a Key Lime themed birthday cake.   So my time in Midland came to a finale, but not my time in Michigan's perfect summer weather (it's sunny and 78 as I write this).  I plan to camp a different route back across the Upper Penninsula and slowly head west.  As it was 102 F in Texas today I'm not in a huge hurry to trade Midwest weather in for that.