I finally worked my way to my brother's house in Midland, MI.  It's been a fairly eventful last three days.  Tuesday night I stayed at the Missouri Welcome Center on US 57 just across the Arkansas border and endured a huge thunder storm with winds so powerful the Tank was "rolling" back and forth through about a 20 degree arc.  I couldn't help but think about Oklahoma and wonder if these winds were the lead-in to something catastrophic but they eventually died out, resulting in about a 20 degree dip in the temperature.

Wednesday I drove up through Southern Illinois till I hit I-70 and headed east.  Right before Terra Haute, IN, with one of two lanes of I-70 down for road work there was a huge fatality accident with a chemical spill.  They completely shut down I-70 for over 6 hours, diverting traffic through the city streets of Terra Haute in a mind numbing gridlock. 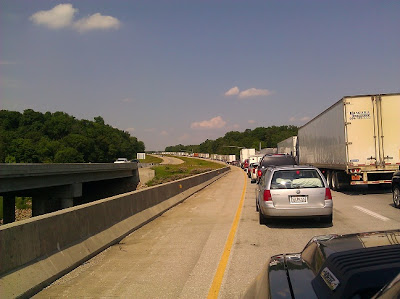 Miles and miles of 18 wheelers.

It took 3 hours to get through Terra Haute....usually it takes less than 10 minutes.

Unfortunately, many of the trees on the tree-lined streets of Terra Haute hadn't had their limbs trimmed back for some time and one of them whacked the Tank's refrigerator vent pretty hard which necessitates damage control and (hopefully) finding a local source for a drop-in replacement. 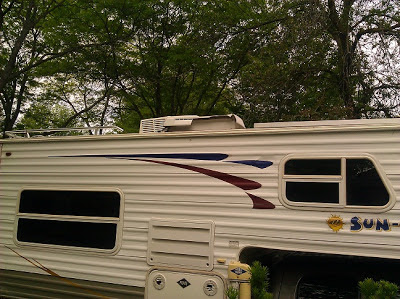 At least the tree didn't take out a solar panel!

After fixing the refrigerator vent I'm targeting Houghton Lake State Park for some Sunday through Wednesday camping where I can try out my never-been-used collapsible fishing rod.  With daytime temperatures here in the low-seventies it's hard to believe I'm in the same country having come from sweltering Texas to a Michigan with 46 degree nights!  I can get used to this!

Thanks for reading!
Posted by JM Monica at 7:19 AM