I haven't really done any further work on the camper since the last post, I've mostly been trying to sell my house and prepare to move out.  Actually, I've already sold it twice!  I accepted, then lost two offers the first weekend the house went on sale.  The realtor says to just be patient so that's what's going on along the "Getting out of the homeowner business" front.

Twenty years ago when I moved into this house I had what was a pretty good-sized mound of possessions.  Furniture, fitness equipment, pictures and wall decorations, clothes, books, sporting equipment, all the then eight-year-old daughter's toys, clothes, holiday decorations, stereo and televisions, on and on!  After twenty more years of unabashed "Oooooo....I need that!" consumerism the amount of "stuff" I've managed to accumulate is kind of shocking, even if a good portion of it hasn't been used in years (decades). 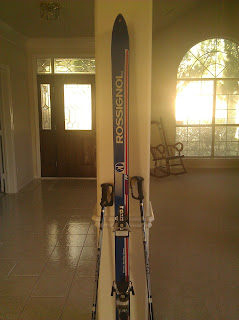 Wonder what the market is for 30-year-old Rossi's?

The problem (at least one of them) I face is how do you unload this stuff in an ethical, environmentally sound way?  Getting any return value would be nice but, seriously, someone is going to buy this place soon (I hope) and expect me and my "junk" to be elsewhere at some specific date.  Yikes!  I've been doing a lot of research into how to accomplish downsizing my inventory of marginally useful possessions and I've come up with the following list that hopefully can help others trying to accomplish something similar in their lives.

None of my family lives close to me except my sister in Austin and she gives ME stuff so while this didn't work for me it's quite possible you might have family members you could "gift" that old set of golf clubs to.  Worth a try.

One of my friends friend has offered to buy my dining room set after my friend let them know it was available.... Yay!  Storage square footage greatly reduced and green paper coming in....Win!

My great next door neighbors are buying my sectional sofa, a huge piece of furniture I know longer will need no matter where I end up! 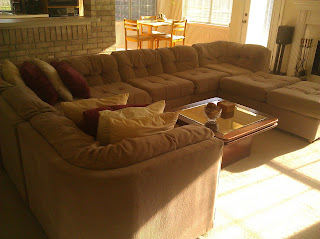 My daughter and I donated several pickup beds full of items to Goodwill and I encourage everyone who can afford it to do so also.  Goodwill employs many individuals who have disabilities and that is very cool!

Remember back in college at the end of term when people would create a "Freestore" where everyone offered up all the stuff they didn't want to take with them?  I recently discovered Freecycle.  It's an exchange where people who need things in your area post it on freecycle.org and if you have the item in need and are willing to give it away you email the poster and they drive over to your house and <poof> it's gone.  You can also post things that you WANT to give away and people will respond and come get the items.  I can't guarantee the item won't end up on EBay but, hey, you got rid of it, right?  No money ever is exchanged on Freecycle, everything is free.

As a former IT guy there were five to six complete PC's in various condition along with monitors and sundry computer parts in my house.  You aren't supposed to throw that stuff in the garbage.  Fortunately I live near Houston and the city runs an electronic recycling center that takes equipment like I had for free!  Some cities charge up to $20 per PC so free is a great deal!  Big disposal problem goes away!

So that's what I've been doing.  It's hard to get rid of all the stuff that some wacko (me) worked so diligently for the last 30 years to amass but I'm chipping away at it.    Thanks for reading!