I've put most of the final touches into the camper with possibly one big exception that I'll cover last.  In a previous post I mentioned how much interior square footage the factory installed queen mattress was taking up and my plans to put in a twin size and utilize the freed up space for storage bins.  This is what the bins and bed area look like now. 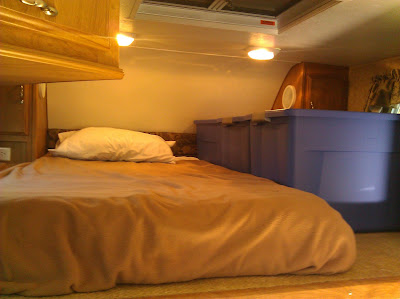 I need a lesson in bed making!

The 22 gallon bins are from a company called Sterilite and are pretty thick plastic with latching removable tops.  22 gallons is about two thirds the size of a normal garbage can so they should hold a lot of "stuff".  Also, placed where they are puts them forward of the camper's center of gravity which reduces weight carried by the rear axle of the truck which is always desirable.

I have yet to ever shower in the camper.  The shower works fine but thus far I've never been in the camper long enough while not having access to other means of bathing.  To make standing in the bathroom a little more comfortable I "carpeted" the shower! 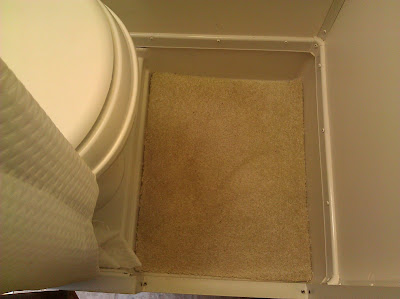 When the shower finally IS used the piece of carpet comes right up.  This should be more comfortable than standing on the plastic shower floor during non-showering activities.

And lastly, I put in a 100 watt solar panel (PV) a while back to keep the camper's 105 amp hour battery charged.  In a previous post the new solar charge controller was discussed and the whole system is working pretty well, the battery stays at 100% throughout the day.  Recently, though, I was running my laptop through an inverter and this 12 volt fan at the same time on a fairly sunny day and the PV panel couldn't keep up. 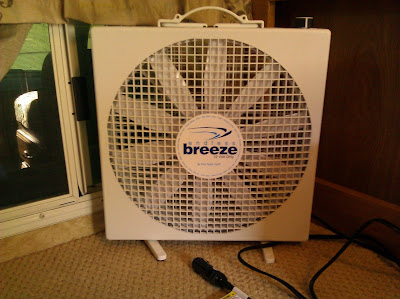 In lieu of running the jet-engine....I mean AC.

The solar panel puts out a little over 5 amps of electricity (100 watts / 18 volts = 5.55 amps) under ideal 100 per cent sunny conditions.  The fan draws about 2 amps and my laptop (depending on what it's being used for) pulls a little more than 4.5 amps so with both those drawing power, the battery started to go below 100%.  Since using my laptop and running a fan are going to be pretty likely daily activities ideally I'd like the PV system to be able to handle the "draw" of about 6 amps or so, with the one panel it doesn't appear able.

Which takes us up to the camper roof! 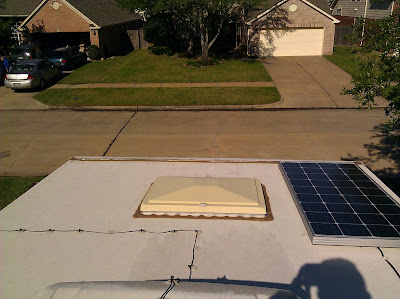 Nice shot of my neighbor's yard!

There is plenty of space to the left of the hatch cover to mount another 100 watt panel and double the generating capacity of the system to around 11 amps (200 watts / 18 volts = 11.11 amps).  The charge controller is rated up to 20 amps so no upgrade is needed there.  An eleven amp system would allow some "cushion" on partly cloudy days when 100 % PV efficiency isn't possible so I bit the bullet and ordered another 100 watt panel like the one already installed and the mounting hardware and wire to connect it in parallel to the one in the picture.  When it gets here I'll do another post on the installation process and results.

Thanks for reading!
Posted by JM Monica at 8:27 AM