The second 100 watt solar panel came in along with the mounting hardware and wire so I decided to take advantage of the beautiful spring weather here  in Texas and install it.  After attaching the "Z" mounting legs on the ground I lugged the panel up the ladder and maneuvered it into place on the left of the vent as discussed in a previous post. 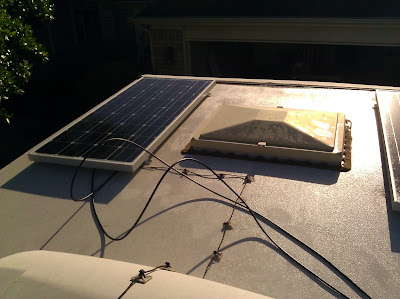 The other wire is a Sirius XM radio antenna....wish I had one!

After screwing the legs into the plywood roof  through the 3M mounting tape that I had put on the bottom of each Z leg I coated each leg with a big helping of Dicor Sealant to insure no water penetrates into the wood of the roof when it rains.  I highly recommend Dicor, after you apply it it "self levels" and makes a very nice seal.  I want to connect the two panels in parallel so that  the voltage of the system remains the same (18 volts) but doubling the current flowing to the battery (about 5 amps with one panel, hopefully 10 with two).  To do this I have to splice the new panel's positive and negative wires with the positive and negative wires of the installed panel.  This splice would be exposed to the elements if not protected so I have it all taking place in this junction box that is attached to the roof behind the refrigerator vent. 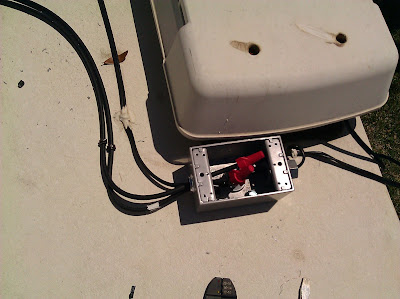 Positive to positive - negative to negative

After checking that the power controller by the battery was indeed getting power from both panels I sealed up the junction box and squeezed Dicor around the wires where they enter the box to seal it to the environment.  In it's location the box is shielded from airflow while driving and also doesn't create any additional "drag" (as if this rig needs any more!). 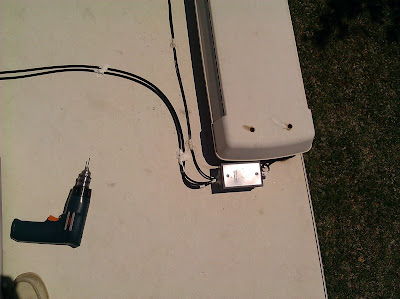 Have gun, will travel!

So I took my multimeter tool to the solar controller and connected it to the positive wire coming from the now parallel solar panels and switched the multimeter to measure DC amps going into the controller.  Surprisingly, even though it's a cloudless day here the display jumped around quite a bit from 6 amps all the way to 9.8 (which was the high reading).  I guess if I would have taken this measurement when just the one panel was connected it would have showed 3 amps all the way up to 4.9 so I'm grateful for the doubling in current even though it's not the predicted 11 amps if 100% efficiency could be obtained.  Oh well, I guess More Power! is better than whatever you used to have! 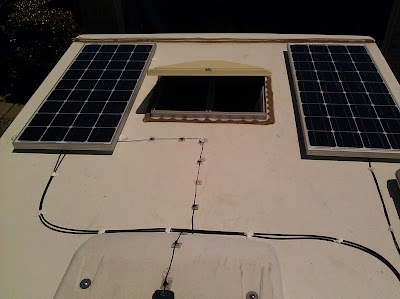 Wish I had a buck for every time I climbed up and down the ladder today!

Thanks for reading!
Posted by JM Monica at 12:45 PM