I left Arizona and traveled up Highway 191 into eastern Utah on my way to Grand Junction, CO to have RV repairman extraordinaire Larry Pike repair the Tank's roof hatch which had gotten torn off by an intense "micro burst" of wind.  The previous summer Larry had fixed the Tank's balky refrigerator in under an hour and once you get to trust a mechanic I tend to stick with them.  To cut the rather long drive in half I overnight-ed on some BLM land northeast of the town of Mexican Hat, UT that contains one of the coolest looking rock formations I've encountered:

With the exception of some day users I was the only camper in the area but since I was leaving in the morning I picked the first site on the way into the area, parked the Tank and proceeded on foot.

Here's the data sheet on the area:

Since the place doesn't really have an official name and is generally referred to "Mexican Hat" here's the GPS coordinates in case you want to visit:  37.172547, -109.847076.  The more scenic camping area is reached by following the access road you see going by the Tank above down into the San Juan River valley that cuts through the area.  There is one steep part to the road but cars were easily traveling it when I was there.

The rock formations are the area's main attraction and my photography hardly does them justice: 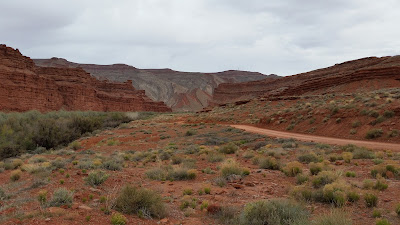 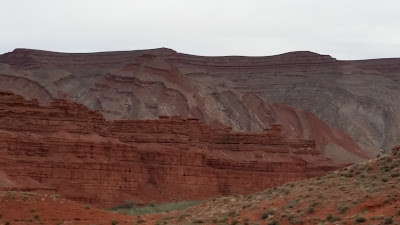 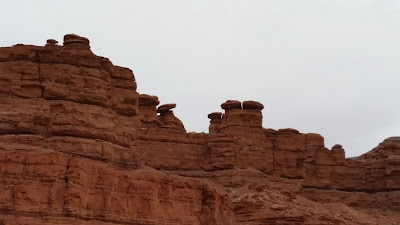 I regretted only having 24 hours to spend at the Mexican Hat, the views of the rock formations were truly outstanding!  I'm certainly loading it onto my "Must Revisit" list and would highly recommend it to anyone traveling through eastern Utah.

Thanks for reading!
Posted by JM Monica at 1:02 PM