From Levan Town Park I traveled south to the Dixie National Forest in south central Utah, planning to boondock there for five or six days. 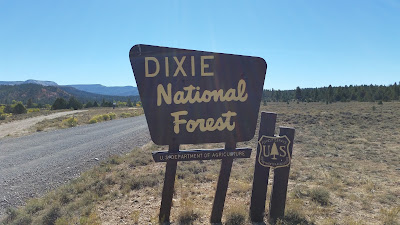 The first three days were just ideal and the weather at my campsite, which was about 20 yards off a forest service road, was 78 in the day and low forties at night.  The ground that made up the Tank's campsite was a mixture of clay-ish dirt mixed with gravel.

On the night of my third day at the campsite the weather changed for the worse, with rain falling in sheets for almost 48 consecutive hours.  I had a bad feeling when I stepped out of the Tank and my boots sank into mud about three inches,  if I sank that far how deep would the Tank sink if I moved it off it's leveling blocks which appeared to be somewhat supporting the pickup's wheels?  After the rain paused for an hour I took the chance to see if I could bull my way to the forest service road.

As soon as the Tank moved six inches off the leveling blocks I felt it sink into the mud--deep---and not move and further.  I was at least bright enough not to over spin the drive tire (none of that four wheel drive stuff for me!)  and dig in deeper, I climbed back into the camper and resolved to wait until the campsite dried out to try again, and then it began raining for twelve more hours.

I was grateful for having a lot of extra canned goods in the Tank's cupboards and I did have plenty of fresh water and adult beverages so I waited out two more days but each time I climbed into the Tank the drive wheel couldn't grab traction and I was still stuck.  The next morning I woke up after a chilly night, looked out my window and saw this:

The muddy soil had frozen under the Tank!  I got the idea of taking an almost empty charcoal bag I had and pushing it under the drive wheel so that the drive wheel could use the heavy paper for traction and then I climbed behind the wheel and put it in drive.  I felt the Tank move forward a little (this hadn't happened before) so I gave it gas and the drive wheel climbed out of it's hole, I didn't stop until the Tank made it to the service road.

I learned some things from my being stuck.  The first is to carefully analyze the type of ground you park your RV on.  Had I done this I would have moved the Tank as soon as hard rains had begun to fall, I won't fail to move to more compacted ground in the future.  Second, I need to carry some type of traction improver (my brother says a bag of birdseed would work) because once the drive wheel gets coated with the mud it has almost no way of getting traction.  Finally, having extra cans of food (and beer) in your RV can REALLY come in handy if you have to "hang around" for a few extra days.

Thanks for reading!
Posted by JM Monica at 1:48 PM